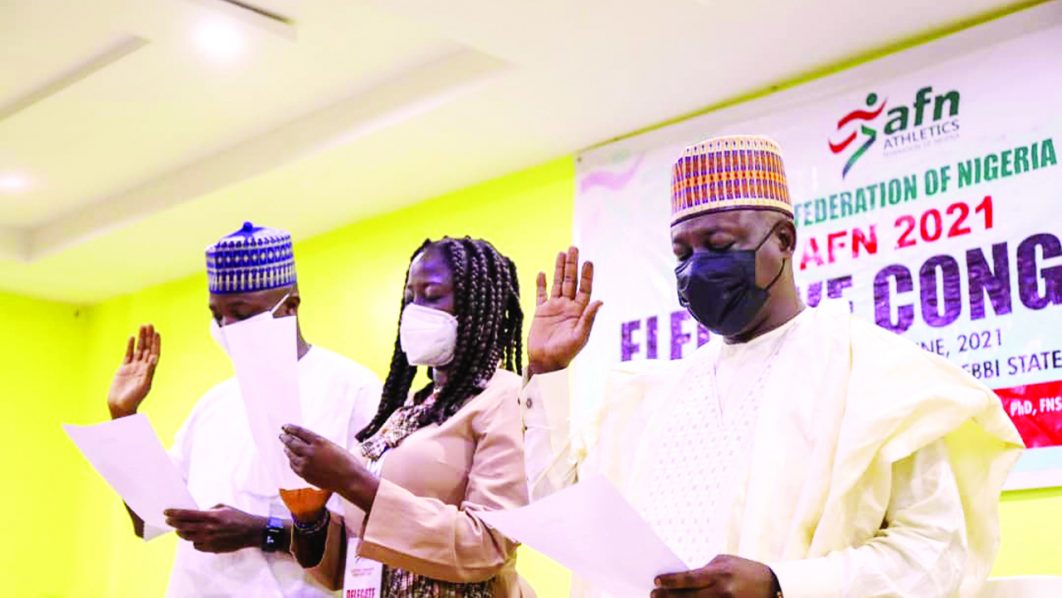 The tussles for the control of the Athletics Federation of Nigeria (AFN) were heightened yesterday when two separate presidents and boards of the federation were elected in two elections held in Abuja and Birnin Kebbi.

The battle for the control of the AFN has been raging since a faction of the federation impeached Ibrahim Gusau as the board’s president. Gusau, who challenged his impeachment in court, held on to his position even when the supervisory Ministry of Youth and Sports Development elected to recognise his hitherto vice president as the leader of the federation up until when the boards of all the country’s federations were dissolved.

World Athletics (WA), which came to Nigeria to broker peace among the warring factions, had given the AFN a June 14 deadline to conduct elections into the board of the federation.

Perhaps, because the world body did not specify who should conduct the polls, both factions chose to do things their different ways, with GUsau picking his factions electoral committee and fixing the polls in Kebbi State, while the sports ministry supported faction chose Abuja for its elections.

He was elected unopposed with 43 out of 44 votes cast by the delegates. One of the votes was declared invalid.

Before the election, which took place inside the VIP Lodge, National Stadium, Abuja, former vice president of the federation, Olamide George was beaten 4-0 by Solomon Alao (Lagos) in the re-run election for southwest zonal representative. The earlier election on Friday in Ibadan failed to produce a winner.

The Guardian learnt that George was edged out following what a source described as high level ‘gang up’ by delegates from the southwest, following his alleged role in the dissolution of Ekiti State Athletics Association two days to the Southwest zonal election in Ibadan. George was said to have prevailed on the government of Ekiti to dissolve the state athletics association to prevent the chairman, Samuel Fatula, from challenging him at the election in Ibadan.

One of the outgoing AFN board members, Ahmed Kaita, from Northwest, who had earlier indicated his intention to contest for the position of the president, cried foul yesterday following a last-minute cancellation of an earlier order from the AFN secretariat that the northwest zonal election is repeated.

Kaita told The Guardian yesterday that the zonal election held in Kaduna last Friday was hijacked by one state governor, adding that the AFN cancelled it and ordered a re-run for yesterday.

“I got a message from AFN that the election in Northwest was cancelled and we should come for a new election today (yesterday). But that did not happen and I am sure the same governor may have stepped in again. It is bad for our athletics,” Kaita stated.

Yusuf Liman is the Northwest representative on the new AFN board.

Meanwhile, the ACAN/NAATO election, which was not concluded in Ilorin last Wednesday, has been moved to June 18 in Lagos. Three candidates, Omatseye Nesiama, Brown Ebewele and Solomon Aliu are the contestants for the coaches and technical officials ticket.

Like Kaita and Olamide George, Nesiama had earlier indicated his intention to contest for the position of president of the AFN.

Sports minister, Sunday Dare, is expected to inaugurate the board this morning in Abuja.

While the candidates were battling for positions in Abuja, the polls in Birnin Kebbi was relatively peaceful as the delegates returned AFN’s immediate past president, Ibrahim Shehu Gusau, to his position.

Gusau polled 20 votes while Uche Muoma got just two votes from the 22 delegates present at the venue.

North West Zonal Representative, Sunday Omotayo Adeleye, got 15 votes to beat Solomon Abari, who had for votes, and Patrick Estate with three votes to the first vice president position.

Other members of the board include Olu Sule, who is a representative of the technical Officials and coaches, as well as Moses Suleiman, who became athletes representative.