BTS proved again that they are South Korea’s pride with their incredible speeches and messages at the UN General Assembly 2021, SDG Moment. A few days ago, the South Korean boyband was chosen as the special envoys to speak at the General Assembly. And after weeks, they flew to New York with the president of the Republic of South Korea to attend the SDG Moment. Moreover, they also performed ‘Permission To Dance‘ at the venue, making history again. So, it will be okay to say that no one is doing like BTS right now. From being music sensations to speaking twice at the UN, they have become the pride of South Korea. The fans are constantly posting about their speech and sharing beautiful messages to congratulate the boy band.

Global superstars, BTS spoke at the 76th session of the UN as the special presidential Envoys for future generations and culture. Best leaders from all around the world were present there. Hence, the Kpop boyband managed to get respect from the best leaders. As a part of the session, they earlier asked people (in their 20s) about their past two years and the world.

BTS spoke primarily on climate change, poverty, inequality, and how the pandemic has affected those priorities at the SDG Moment. Moreover, all the members discussed individual issues.

On September 20, 2021, BTS spoke at the UN General Assembly at the United Nations Headquarters in New York. The group leaders of the world attended the gathering. South Korea’s president Moon Jae-In went to the stage first and was followed by the group. The leader of the septet, RM, commenced the speech. He began by greeting Abdullah Shaid, President of the UNGA, followed by Antonio Guterres, Secretary-General of UN; President Moon Jae-In; and leaders worldwide. 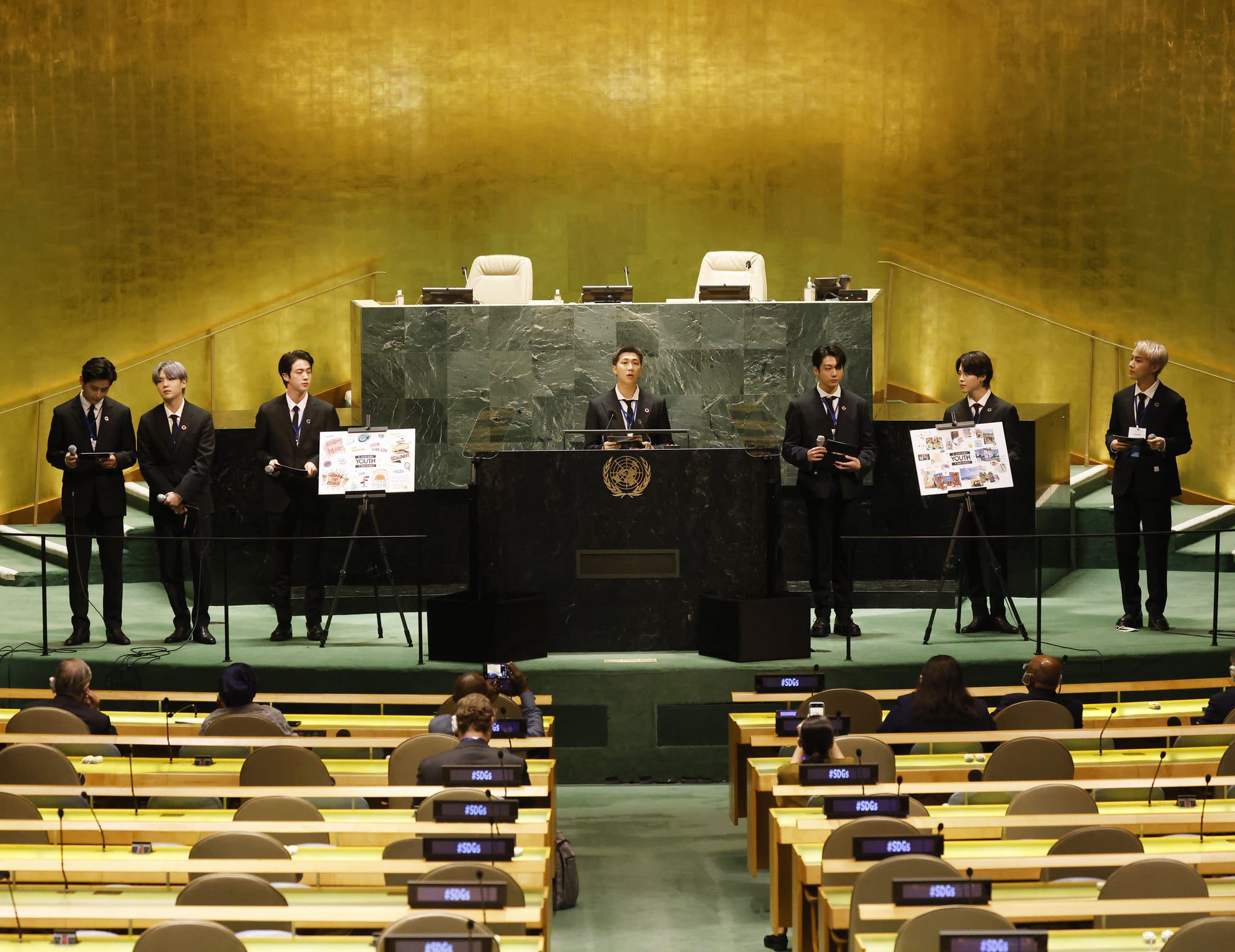 RM then called Jin to continue their speech. The eldest started as he recited the words of young humans, who wrote to them. Followed by Jimin, the speech included how the pandemic was a new challenge for them. Moreover, things were becoming bewildered, but it also encouraged them to make the most out of it. As Jungkook took control, he explained how the ‘parallel world’ led to the cancellation of graduations. Jungkook shared that some of the crucial moments from life were canceled because of the virus.

Due to the unfortunate events, the BTS tour has been canceled two times. And the youngest expressed how it was upsetting for them. Yoongi continued as he explained how covid made us realize the value of each second. Also, how the pandemic has taken some of the best things from our lives. After all the sadness, Jimin replied, telling how people shared pictures of their precious moments with them. People spend time with nature, and they have found a new love for it by spending more and more time.

“We thought the world has stopped, but it continues to move forward. Every choice we make is the beginning of change.”

— @BTS_twt came to UNHQ to support action for the #GlobalGoals & a better world for everyone.

Watch their special musical performance and get inspired. pic.twitter.com/ZQG4pDA61V

J-hope changed the subject of discussion; he talked about climate change and explained the problem,w which does not have a solution. J-Hope mentioned ‘very less’ solutions as RM brought hope by saying how the young generation likes helping to change the environment. “The future is an unexplored territory,” he said. Hence, there is time for young people to be the change.

The Final Message; Permission To Dance performance at UN Headquarters

V began concluding the speech; He explained how there is a lot we need to tell about ourselves. Plus, we should not act as the ‘ending’ has already been written. Jungkook continued and said that sometimes the world seems to be stuck in place, even if you’re ready to leave. Later, RM explained that the young generation is being referred to as the ‘lost generation’. But Jin shared that instead of calling it ‘lost,’ we should name it as the ‘welcoming’ generation. It is because instead of fearing change, the age says ‘welcome,’ and keeps moving ahead. Finally, RM concluded how we would not lose our way if we kept thinking positively and possibilities even in the most challenging times.

In the end, all of the BTS members confirm that they have been vaccinated. And how it is a way to a free world. Thye explained that they would be able to meet their fans soon.

The severe and crucial moment turned to a happy place as Jungkook took charge and began crooning ‘Permission to Dance’. BTS gave a powerful, positive, and lively performance at the headquarters, proving that they could do it all. Furthermore, 1 million people were a part of the live session, as per reports. Therefore, BTS at UN General Assembly 2021 for the SDG Moment was definitely a success.

You can watch it down below: