Co-Founder and chief executive officer of Twitter, Jack Dorsey, on Saturday took many people, particularly Nigerians, by surprise when he tweeted the green and white colour of the Nigerian flag on his handle jack (@jack).

His action coincided with Nigeria’s Democracy Day and amidst the row triggered by the federal government’s suspension of the activities of the microblogging platform.

In the heat of the #ENDSARS crisis last October, Dorsey asked his followers to donate bitcoin so as to support the movement, after the government had suspended the conventional method of donating for the protest.

In suspending Twitter operations, the federal government said its action followed “the persistent use of the platform for activities that are capable of undermining Nigeria’s corporate existence.” 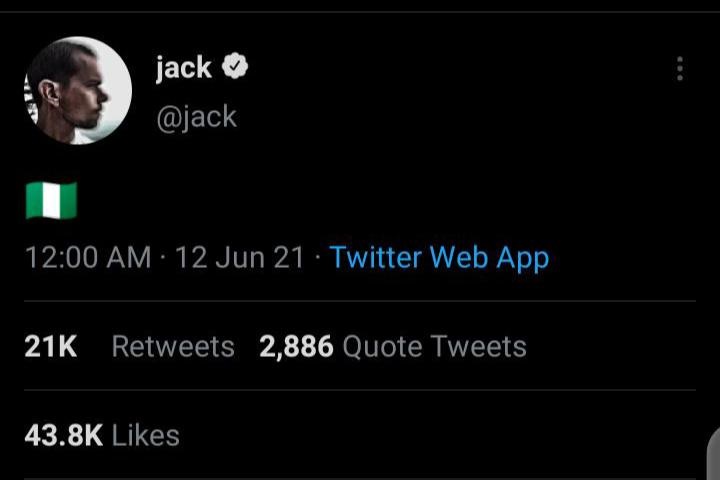 Twitter confirmed on Friday that it had reached out to officials of the federal government for talks on the suspension of its operations in Nigeria.

It said in a tweet that the planned meeting would address “mutual concerns.”

It said: “Today marks one week since Twitter was blocked in Nigeria. We have informed the Nigerian government that we are ready to meet for an open discussion to address mutual concerns and see the service restored. We remain advocates for the free and #OpenInternet everywhere. #KeepitOn.”

Information Minister Lai Mohammed first dropped hint of the meeting on Wednesday when he said Twitter wanted a “high-level discussion” to resolve the issue that led to the suspension.