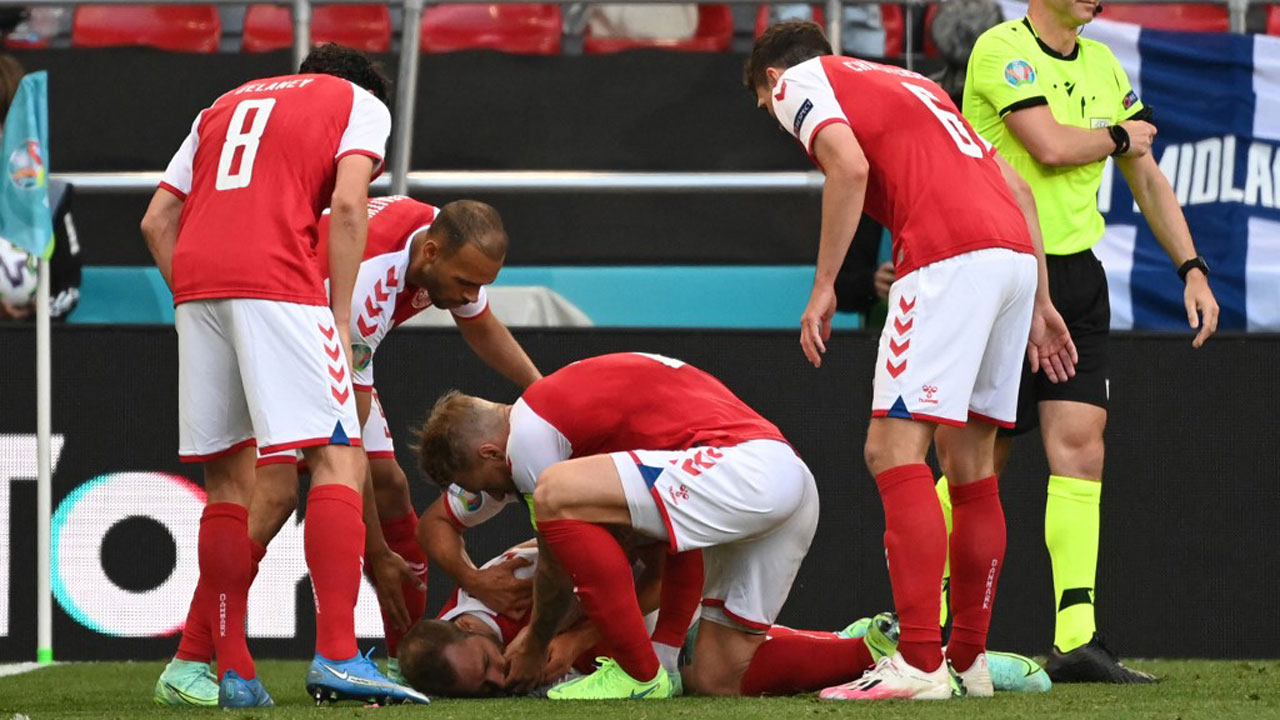 Denmark players help Denmark’s midfielder Christian Eriksen after he collapsed before the medics arrive during the UEFA EURO 2020 Group B football match between Denmark and Finland at the Parken Stadium in Copenhagen on June 12, 2021. Jonathan NACKSTRAND / AFP / POOL

Denmark star Christian Eriksen was awake in hospital and undergoing tests after collapsing and needing to be revived on the pitch against Finland on Saturday, as the Euro 2020 match between the teams in Copenhagen was delayed for nearly two hours.

The Danish Football Union (DBU) said Eriksen was “awake and undergoing further tests” having earlier received CPR from medical personnel before being taken off on a stretcher.

The Group B game — just the third of the month-long tournament which began a year behind schedule on Friday — was stopped just before half-time with the score goalless and suspended for nearly two hours before restarting at 8:30 pm (1830 GMT).

UEFA said the decision to restart was made “following the request by players of both teams” and supporters cheered as the game recommenced.

“We’ve been in contact with him, and the players have spoken to Christian. That’s the great news. He’s doing fine, and they are playing the game for him,” Peter Moeller, a director at the DBU, told Danish television.

Earlier Eriksen’s teammates were in tears as they stood around the stricken 29-year-old Inter Milan midfielder.

“Moments like this put everything in life into perspective,” said UEFA president Aleksander Ceferin.

“Forza Chris, all of our thoughts are with you,” tweeted Inter, with whom Eriksen won the Serie A title in the season just finished.

A crowd of 16,000 in Copenhagen’s Parken Stadium — around 45 percent of the capacity — had been celebrating the chance to see their national team again live at the stadium after a year of coronavirus restrictions before Eriksen’s collapse.

There are high hopes in Denmark for their team, who were surprise European champions in 1992. Finland are playing at a major tournament for the first time.

England decided to cancel their press conference prior to Sunday’s match against Croatia out of respect.

However, Saturday’s late match between Russia and much-fancied Belgium in Saint-Petersburg, in the same Group B, went ahead as planned at 1900 GMT.

Earlier the tournament, which is taking place in 11 venues all across Europe, stopped off in Baku where Euro 2016 semi-finalists Wales drew 1-1 with Switzerland.

Kieffer Moore, the giant Cardiff City striker sporting a red bandage around his head, scored the equaliser for Wales in the 74th minute, heading in to cancel out the opener scored by Breel Embolo early in the second half.

“We showed a lot of character, like we always do, to fight back, be brave, get on the ball and get the equaliser,” Wales captain Gareth Bale told the BBC.

That result followed Italy’s 3-0 defeat of Turkey in the same Group A in the tournament’s opening game in Rome on an emotional Friday night, as Andrea Bocelli performed ‘Nessun Dorma’ in the Stadio Olimpico before Roberto Mancini’s side cruised to victory.

A crowd of 16,000 watched that match, lending a noise and colour to the occasion not seen at football over the last year of games in empty stadiums due to the Covid-19 pandemic.

Limited crowds are being allowed in to matches at the Euro, which was postponed a year ago because of the health crisis.

Covid-19 continues to cause chaos, with Russia’s build-up to the Euro hit when winger Andrei Mostovoy contracted the virus and was ruled out of the tournament just before its start.

He is one of a number of players to have tested positive for Covid-19, with Spain skipper Sergio Busquets out of their opening game against Sweden on Monday in Seville.

Nations have been allowed to name expanded squads of 26 players for the Euro instead of the usual 23 because of the virus.

Among the leading contenders are England, who begin their campaign against 2018 World Cup runners-up Croatia on Sunday.

England are playing all three group games at Wembley. If they top their group they will also play there in the last 16, while London is also the venue for both semi-finals as well as the final on July 11.

Croatia skipper Luka Modric admitted that the situation could work in England’s favour.

“Everyone would say teams at home with a crowd, that there is a slight advantage,” Modric told the BBC.

World Cup holders France — with Karim Benzema recalled from a five-and-a-half-year international exile — are the favourites to add the continental crown.

They begin their campaign against Germany in Munich on Tuesday, just after holders Portugal, with Cristiano Ronaldo backed up by a star-studded squad, play Hungary in the same Group F.