Eriksen reassures as Denmark try to move on with Euro 2020 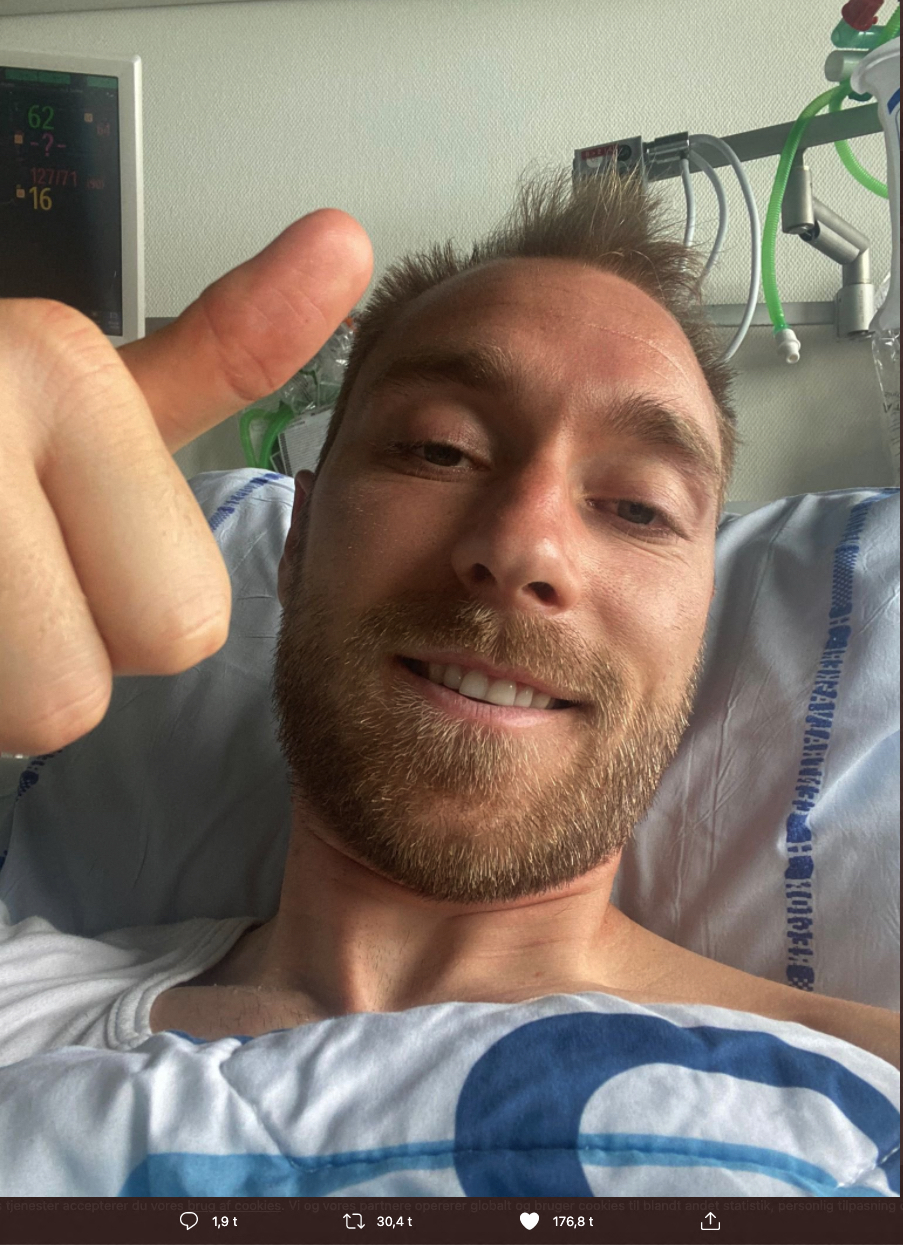 Denmark’s Christian Eriksen on Tuesday published a photo of his tired but smiling face from his hospital bed after his collapse during his country’s opening Euro 2020 game, as UEFA defended the decision to resume the match.

In a scene that shocked the sporting world and beyond, the 29-year-old Inter Milan midfielder suddenly collapsed on the field in the 43rd minute of Denmark’s Group B game on Saturday against Finland in Copenhagen.

“I’m fine — under the circumstances, I still have to go through some examinations at the hospital, but I feel okay,” he wrote in a post to Instagram accompanying a photo of him smiling and giving a thumbs-up while lying in bed.

“Big thanks for your sweet and amazing greetings and messages from all around the world. It means a lot to me and my family,” he wrote in the post, which has been liked more than 3.5 million times.

“Now, I will cheer on the boys on the Denmark team in the next matches. Play for all of Denmark.”

Medical personnel administered CPR as he lay motionless on the field for about 15 minutes before being carried off the pitch and rushed to hospital.

He was later confirmed to have suffered cardiac arrest.

On Sunday, team doctor Morten Boesen said he had “no explanation” for the event.

The Danish Football Union (DBU) has been tight-lipped about the midfielder’s condition, reporting that he is “stable” but declining to answer questions about his prospects of returning to the field.

“He has to undergo different examinations, and as long as we don’t have the conclusions from that we cannot comment,” DBU spokesman Jakob Hoyer told a news conference.

The team’s coach, Kasper Hjulmand, said Tuesday Eriksen had watched the last 10 minutes of Denmark-Finland from hospital and was in daily contact with the team, giving them some reassurance ahead of their upcoming clash with Belgium — ranked number one in the world by FIFA.

“We can focus more and more on football and prepare for the game,” Hjulmand told a press conference, but admitted that some players might still be rattled by the game on Thursday.

“We will prepare ourselves as well as possible, but it will be emotional for sure. But we should use these emotions for the match, and get ready to fight,” Hjulmand said.

Hjulmand also didn’t want to go into details about who would replace Eriksen in the line-up.

“No one can replace Christian. No one. It’s not possible… He is the heart of the team ,” the coach said.

While insisting the squad was made up of “real warriors”, the coach also lamented what he described as the pressure from UEFA to decide on a resumption of the match.

“I feel the players were put under pressure… and faced with a dilemma” about whether to resume the match on Saturday or Sunday lunchtime, Hjulmand said.

On Monday, goalkeeper Kasper Schmeichel regretted being put in a position that he personally felt the team “shouldn’t have been put in”.

UEFA defended itself on Tuesday, saying in a statement to AFP “it treated the matter with utmost respect for the sensitive situation and for the players”

“It was decided to restart the match only after the two teams requested to finish the game on the same evening,” the football body said.

UEFA also pointed out that its statutes require players to rest for 48 hours between matches and categorically denied “that either team was threatened with a forfeit”.