Home » FACT-CHECK: No! Tinubu did not ‘declare support’ for June 12 protest

FACT-CHECK: No! Tinubu did not ‘declare support’ for June 12 protest

Claim: Several blogs including lagosstreetjournal.ng, nationnewslead reported that the National leader of the All Progressive Congress, Asiwaju Bola Ahmed Tinubu reportedly ‘declared his support’ for the #June12thProtest. 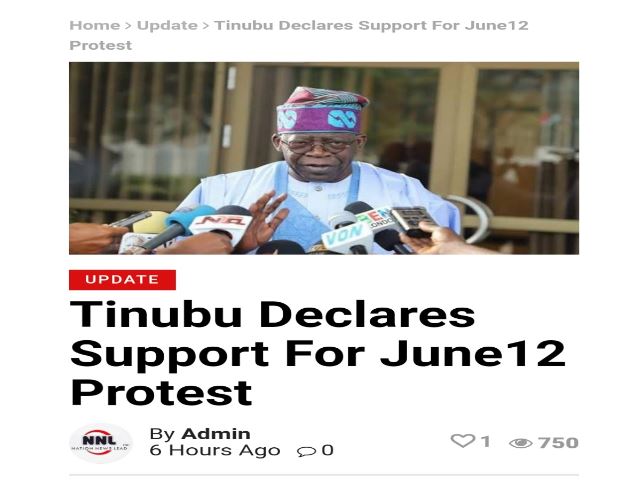 A blog — nationnewslead — had reported that Asiwaju Bola Ahmed Tinubu declared his support for the #June12thProtest with reference to his democracy day speech.

The Nation observed that as at the time of report, the news had gathered over 700 readers according to the website statistics.

It reported: “All Progressive Congress, APC leader, Bola Ahmed Tinubu has reportedly declared his support for the #June12thProtest by asking Nigerians to stand up against anything hindering democracy.

“The APC National Leader in the mood of June 12 Democracy Day celebrations has urged Nigerians to stand for democracy.

“The APC Chieftain, made the call in a congratulatory message to the nation on Friday, adding that democratic governance offers solutions to national challenges.

“Tinubu urged Nigerians to stand for democracy despite the challenges they were going through.

“Democratic good governance offers the only reasonable solution to the challenges confronting Nigeria.”

On June 6, 2018, Buhari declared that the Democracy Day will hold on June 12 of every year.

Buhari made the declaration after the Federal Government honoured the late Moshood Abiola, presumed winner of the 1993 presidential election.

This year, several Nigerians, including groups such as agitators for Yoruba Nation called for protests across Nigeria against bad governance and insecurity.

Checks by The Nation observed that the Democracy Day speech by National leader of the All Progressive Congress, Asiwaju Bola Ahmed Tinubu did not mention the word “protest” nor did it ‘declare support’ for protesters in solidarity/commemoration of June 12 democracy day celebration.

In the speech analysed by our correspondent, Tinubu urged Nigerians to stand against whatever will hinder democracy, especially those engaging in insurrection and violence.

The central theme of Tinubu’s message hinged on promotion of national unity.

“Democratic good governance offers the only reasonable solution to the challenges confronting Nigeria. Thus, we must stand for democracy today. We must stand for it, even more, tomorrow,

“We contend against those who would render the people ignorant and poor. We celebrate Democracy Day not only because we have come far, but to help give us the social fuel and encouragement to continue onward, because we have farther to go and even greater things to achieve as one nation and one people.” he said.

The claim the National leader of the All Progressive Congress (APC), Asiwaju Bola Ahmed Tinubu reportedly ‘declared his support’ for the #June12thProtest is false and misleading.