Claim: A viral message with the title ‘Breaking: Obasanjo writes Buhari’ – Open letter to President, General Muhammadu Buhari dated 12th of July 2021 has been trending on many platforms especially Whatsapp.

Verdict: It is true ex-President Olusegun Obasanjo wrote the letter but it was officially released on 15 July 2019 by his Special Assistant Media Kehinde Akinyemi. The viral message resurfacing in 2021 is MISLEADING.

A 2019 viral whatsapp message resurfaced in 2021 stating that ex-President Olusegun Obasanjo has written a letter to President Muhammadu Buhari. 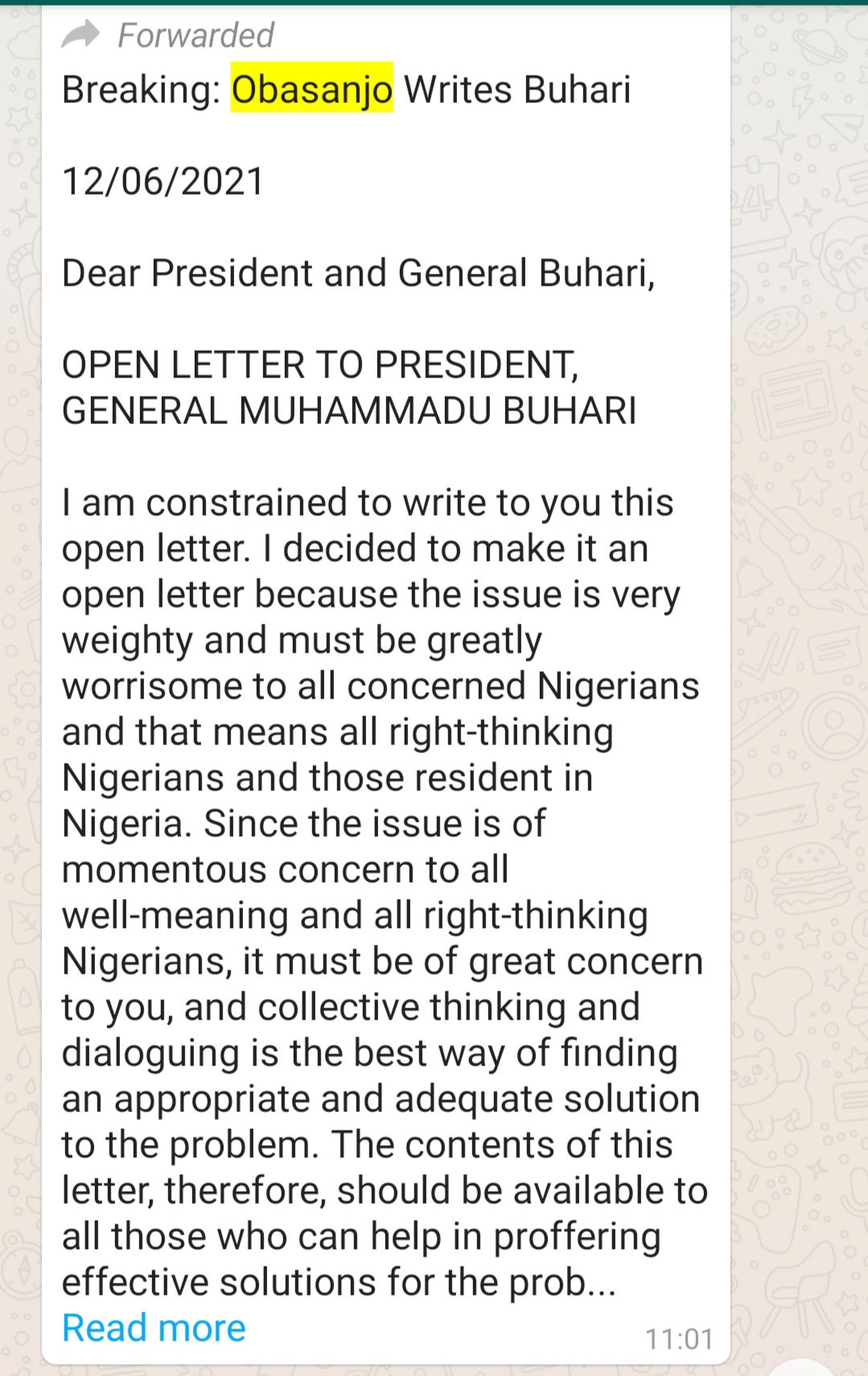 The claim that Obasanjo has written a “new” letter to Buhari also appeared severally on some blogs including nationnewslead.

Over the years, ex-President Obasanjo has written different open letters to incumbents.

Checks by The Nation revealed that Obasanjo wrote to former President Goodluck Jonathan on December 2, 2013 titled “Nigeria is bleeding and the hemorrhage must be stopped”.

In the 18-page letter, he accused Jonathan of taking actions calculated at destroying Nigeria.

Obasanjo also stated that Jonathan failed to deliver on his promises to the people, stem corruption, promote national unity and strengthen national security.

Former President Olusegun Obasanjo’s letter to President Muhammadu Buhari in July 2019, focused on series of warnings that Nigeria is tipping towards a dangerous cliff and only the President could forestall such a looming disaster.

Obasanjo said Nigeria has been consumed by violence and ethnic divisions since Buhari assumed office four years ago, in a manner not seen for decades.

In the July 15, 2019 letter, Obasanjo said the world, especially Western countries, has been warning Nigeria against descending into a state of violence because any outbreak would be difficult to contain.

He warned that for Buhari to be able to stop the “smouldering ethnic agitations”, he would have to stop fanning “the embers of hatred, disaffection and violence.”

Obasanjo also called on armed herdsmen to publicly state their grievances to form a national discussion around it, rather than waging a violent campaign across the country. The calls were also extended to any other ethnic groups that have concerns about how the country is being run.

The killing of Funke Olakunrin, a 58-year-old daughter of Yoruba leader, Reuben Fasoranti, was amongst the national security mishaps which Obasanjo said could tip the country off a perilous edge.

Checks by The Nation revealed that the trending letter dated June 12, 2021 had similar contents with the original letter released on 15 July 2019 except for the closing captions.

In both letters, the introductory aspect begins: “I am constrained to write to you this open letter. I decided to make it an open letter because the issue is very weighty and must be greatly worrisome to all concerned Nigerians and that means all right-thinking Nigerians and those resident in Nigeria.”

The Special Assistant on Media to Obasanjo, Kehinde Akinyemi has debunked the trending version dated June 12, 2021.

It is true ex-President Olusegun Obasanjo wrote a letter to President Muhammadu Buhari dated 15 July 2019 as released by his Special Assistant (Media) Kehinde Akinyemi but the viral message resurfacing in 2021 stating that Obasanjo released the letter dated on 12th of July 2021 is MISLEADING.