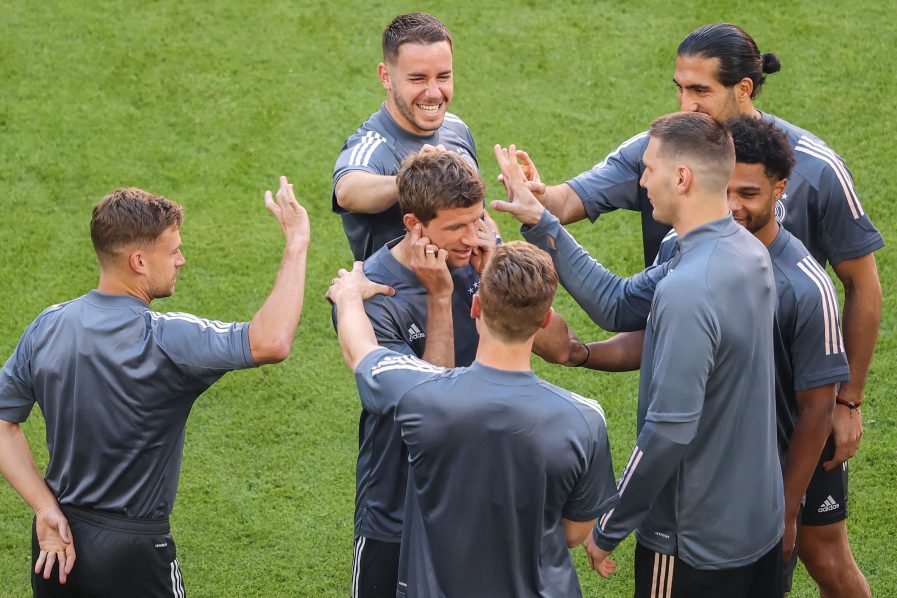 Germany’s players joke with Germany’s forward Thomas Mueller (C) during the MD-1 training session at the Allianz Arena in Munich on June 14, 2021, on the eve of their UEFA EURO 2020 football match against France. (Photo by ALEXANDER HASSENSTEIN / POOL / AFP)

Hernandez has spent two seasons with Bundesliga champions Bayern since his 80 million euros ($97 million) transfer from Atletico Madrid in 2019.

The 25-year-old will line up for visitors to France against several of his Bayern teammates at Munich’s Allianz Arena for the Group F showdown between the European heavyweights.

After a two-year exile from international football, Mueller has been recalled by German head coach Joachim Loew. 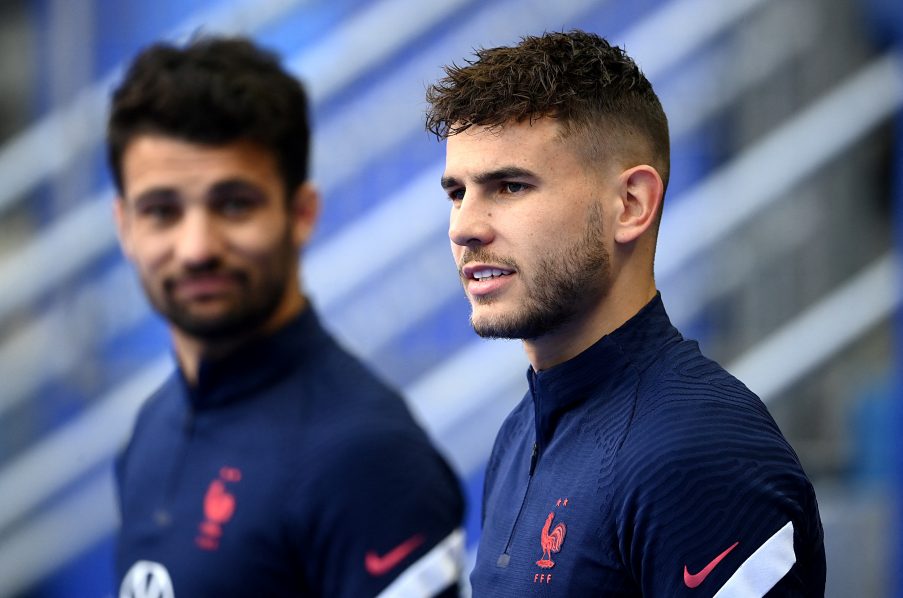 France’s defender Leo Dubois (L) and France’s defender Lucas Hernandez arrive for a training session at the Stade de France in Saint-Denis, north of Paris on June 7, 2021, on the eve of the friendly football match between France and Bulgaria. (Photo by FRANCK FIFE / AFP)

Hernandez sees the attacking midfielder as the threat the French defence needs to nullify.

The 31-year-old Bayern star is set to make his 103rd appearance for Germany on Tuesday and will be hunting his 40th goal for the Mannschaft.

“He (Mueller) is back to his best and he deserves to be back in the national (German) team,” Hernandez told AFP.

“It will be up to us to block him a bit and do the work so that he doesn’t show up too much in the game.”

Hernandez is relishing playing “away” at his home stadium when he runs out at Bayern’s home.

“It’s a beautiful stadium that I know well. There will be a lot of emotions because I’ve been playing there for two years now,” he said.

“There will be a lot of Bayern players on the other side. It will be a special match, different, but, personally, I want to win.”

Bayern players will feature for both teams.

Benjamin Pavard, Coretin Tolisso and Kingsley Coman could all play alongside Hernandez for Les Bleus.

France won the last meeting between the European giants when Antoine Griezmann scored both goals in a 2-1 Nations League win over Germany in Paris in 2018.

Hernandez has netted five goals in 62 games for Bayern, but is yet to score for Les Bleus in 25 internationals.

He hopes to break his duck on Tuesday with a goal past Bayern team-mate Neuer in Germany’s goal.

“It’s true that I’m not a great goalscorer, it’s not my strength,” he admitted with a laugh.

“If I have the chance to score a goal, I would be happy.”