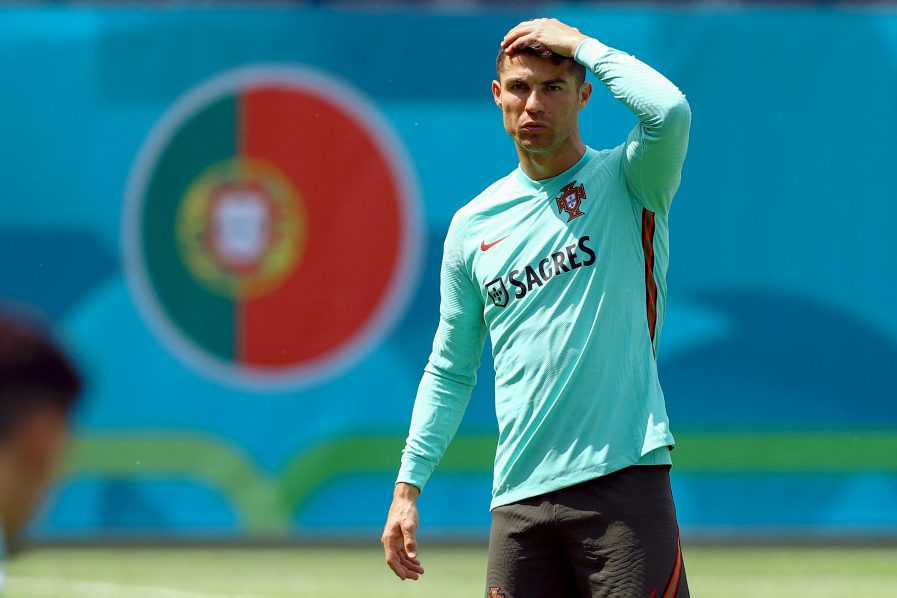 Portugal’s forward Cristiano Ronaldo gestures during a training session at the Illovszky Rudolf stadium in Budapest on June 11, 2021, ahead of their UEFA EURO 2020 football match against Hungary. (Photo by FERENC ISZA / AFP)

Reigning champions Portugal begin their defence of the trophy against Hungary at Euro 2020 in Budapest on Tuesday as World Cup holders France take on Germany in a hotly-anticipated clash between two of the continent’s heavyweights.

Cristiano Ronaldo’s Portugal is set to have the honour of a full house in the Hungarian capital, with the Puskas Arena the only one of the 11 venues at this European Championship where there are no Covid-19 limits on the number of fans allowed.

“It’s perfect. I wish every single venue could host a full house. It’s great for viewers and players, but sadly it’s not up to us to decide,” said Ronaldo of the prospect of a crowd of up to 68,000 watching the first of Tuesday’s two matches at the tournament in Group F.

Ronaldo is 36 now and aiming to score in a fifth different European Championship finals.

He needs just one more goal to become the outright top scorer in the tournament and is just five goals away from equalling the all-time international scoring record of 109 held by Iran’s Ali Daei.

But, from Ruben Dias to Bruno Fernandes and Joao Felix, there is also an outstanding team behind him and Portugal are hopeful of retaining the title they won at Euro 2016 in France.

“Right now we think we have what it takes to win the cup,” said coach Fernando Santos. 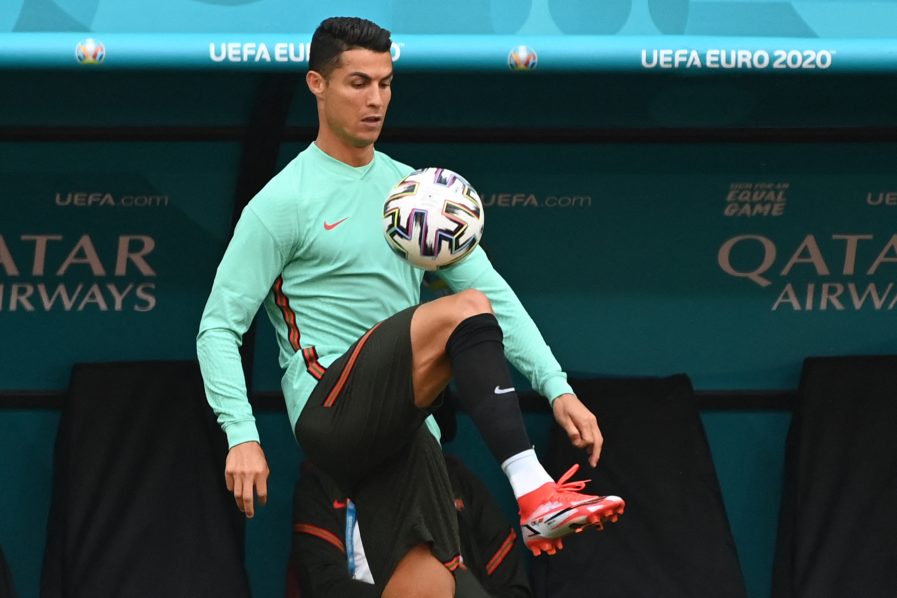 Portugal’s forward Cristiano Ronaldo juggles the ball as he takes part in their MD-1 training session in Puskas Arena in Budapest on June 14, 2021, the eve of their UEFA EURO 2020 Group F football match against Hungary. (Photo by Attila KISBENEDEK / AFP)

Hungary is the rank outsiders in the group but is hoping to make the most of their home advantage.

That game will be followed by the mouthwatering showdown in Munich as the world champions face a German side eager to make up for their desperate showing at the World Cup in Russia when they were knocked out in the group stage.

Les Bleus come into the tournament as firm favourites thanks to their status as World Cup holders and after coach Didier Deschamps decided to recall Real Madrid striker Karim Benzema from a five-and-a-half-year international exile.

France lost 1-0 to Germany in the 2014 World Cup quarter-finals in Rio de Janeiro but are unbeaten in the five meetings between the sides since, including a 2-0 win in the Euro 2016 semi-finals.

“This fixture brings back happy memories and not so happy memories,” said France goalkeeper and captain Hugo Lloris. “It is one of the all-time great major tournament fixtures.”

Germany is under pressure to perform in front of home support at Munich’s Allianz Arena as they come into their final tournament under coach Joachim Loew, who will stand down as coach after the finals following 15 years in charge.

“The spirit is very good and the team is hungry for success. That makes me confident and allows me to sleep peacefully,” Loew said.

In stark contrast to Budapest, authorities in Munich are only allowing around 14,500 fans into the Allianz Arena for games, equivalent to about 20 percent of capacity.

On Monday Spain got off to a stuttering start as Luis Enrique’s side — playing Group E games at home in Seville — were held to a 0-0 draw by Sweden.

European champions in 2008 and 2012, Spain were without captain Sergio Busquets, still isolating after testing positive for coronavirus, and paid for wasteful finishing by much-criticised Alvaro Morata.

“We know what he can do, it didn’t go in for him today it’s true, but in the next game he can score three and shut everyone’s mouth,” said Spain defender Aymeric Laporte.

In stark contrast, Patrik Schick scored one of the championship’s greatest goals, a high, curling shot from just inside the halfway line in the Czech Republic’s 2-0 win over Scotland.

Schick had earlier headed in the opener as the Czechs ruined Scotland’s long-awaited first game at a major tournament in 23 years and went top of Group D.

“The ball bounced back, the goalkeeper was quite high, I took a look, I saw he was out there so I slammed it in,” said Bayer Leverkusen striker Schick of his stunner.

An own goal from Poland goalkeeper Wojciech Szczesny handed Slovakia the lead, but Karol Linetty equalised for Poland.

The Poles were reduced to 10 men on the hour when midfielder Grzegorz Krychowiak picked up a second yellow card, and Slovakia made their advantage count as defender Milan Skriniar drove in a well-taken winner.