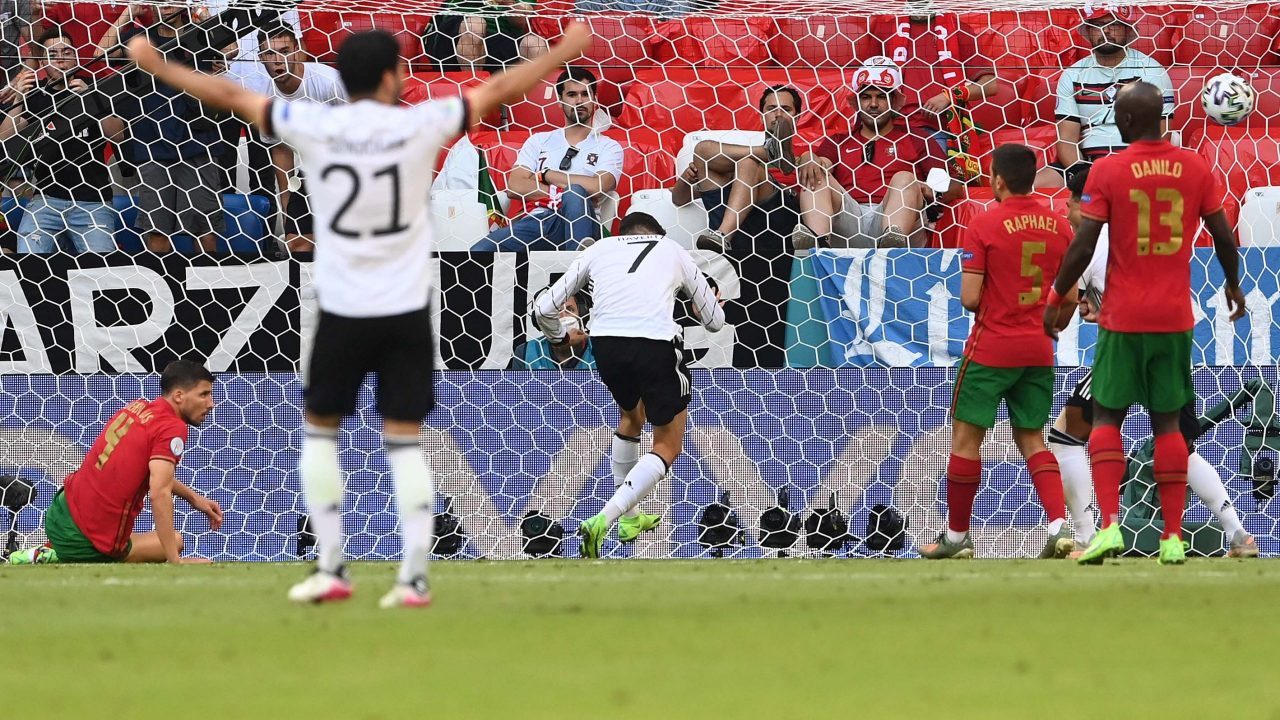 Germany got their Euro 2020 campaign back on track and blew Group F wide open with a 4-2 romp against Portugal in Munich on Saturday.

France’s 1-1 draw with Hungary earlier in Budapest and Germany’s win mean there is all to play for in Wednesday’s final group games when the Germans host Hungary and the French meet holders Portugal.

After Cristiano Ronaldo claimed his 107th international goal, leaving him two short of Ali Daei’s all-time record, to give Portugal an early lead, the Germans roared back with four unanswered goals.

German pressure forced own goals by Ruben Dias and Raphael Guerreiro to put the hosts 2-1 up at half-time.

Portugal hit back when Diogo Jota tapped in Ronaldo’s hooked volley to make it 4-2 with 23 minutes left.

Germany continued their domination of Portugal, who they have now beaten five consecutive times at World Cup or European Championship finals since Euro 2000.

Germany created a huge amount of chances compared to Tuesday’s 1-0 defeat by France, while Portugal lacked the composure of their 3-0 win over Hungary the same day.

The match began at a frantic pace amid sweltering conditions in the Bavarian capital.

The Germans had a goal disallowed after five minutes when VAR spotted Serge Gnabry was offside as Gosens hit a spectacular volley.

With only Gosens and Havertz defending at a German corner, Bernardo Silva started a counter-attack, then picked out Jota in the area with a world-class pass.

The Liverpool forward squared to Ronaldo, who sprinted into the box to slot the ball past Germany captain Manuel Neuer with less than 15 minutes gone.

It was Ronaldo’s first goal against Germany to extend his record tally to 12 goals at five European Championship finals.

However, two own goals inside four minutes turned the game.

Germany drew level when another Gosens volley was flicked towards the net by Havertz, with Dias getting the final touch as the ball flew past Rui Patricio on 35 minutes.

The second goal soon followed when Guerreiro turned Kimmich’s cross into his own net while trying to stop the ball reaching the on-rushing German forwards.

Gosens caused Portugal problems all afternoon on the left flank.

His low cross was tapped in by Havertz six minutes after the break.

The Atalanta player then capped a superb display by powering in a close-range header from Kimmich’s cross on the hour mark.

German fans sang their approval, with “Oh, wie ist das schoen” (oh, is that beautiful) echoing around the Allianz Arena.

Gosens was substituted soon after with his name being chanted.

Portugal pulled a goal back when Guerreiro’s free-kick was hooked back by Ronaldo and turned in by Jota.

Germany nearly claimed a late fifth goal when Havertz’s replacement Leon Goretzka fired over after another surging attack by the hosts.

This is the first time Portugal have conceded four goals since losing 4-0 to Germany at the 2014 World Cup.