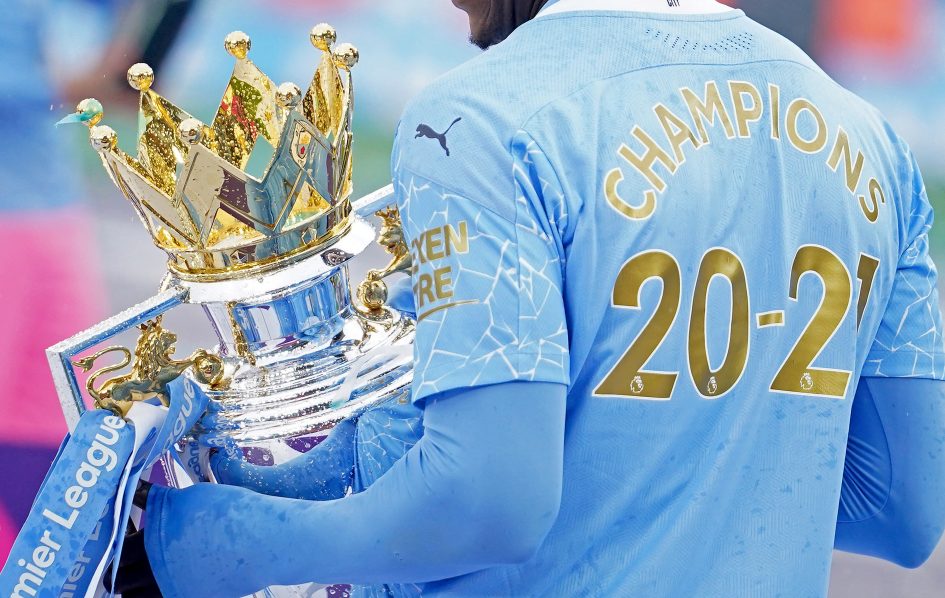 (FILES) In this file photo taken on May 23, 2021 Manchester City’s French defender Benjamin Mendy holds the Premier League trophy during the award ceremony after the English Premier League football match between Manchester City and Everton at the Etihad Stadium in Manchester, north west England. – Brentford and Swansea will slug it out for promotion to the Premier League on May 29, as they meet in a Championship play-off final worth an estimated £180 million ($255 million). (Photo by Dave Thompson / POOL / AFP)

Manchester City has completed a clean sweep of the Premier League’s end-of-season awards after reclaiming the title in an impressive fashion.

Pep Guardiola and Ruben Dias have been named the top manager and player respectively for the 2020-21 season, while Phil Foden was chosen as the best youngster in the competition.

City finished 12 points clear of second-placed Manchester United as they reclaimed the title from Liverpool, winning their third league crown in the space of four seasons, albeit an excellent campaign ended in disappointment with a defeat to Chelsea in the Champions League final.

Key to their domestic success was the form of centre-back Dias, who elevated the defence following his arrival from Benfica.

City kept more clean sheets than any other team in the Premier League last season (19), while Dias featured in more of those matches (15) than any other outfield player at the club.

The 24-year-old Portugal international also helped bring the best out of John Stones, with the duo integral to City’s remarkable run of 21 straight wins across all competitions between December and March.

Dias, who also won the Football Writers’ Player of the Year Award and has been nominated for the PFA Player of the Year accolade, played more league games (32, all of them starts) than any other City defender, helping Guardiola’s team to 23 wins in the process, while they lost just four times when he featured.

He won 62 of his 101 aerial contests, again topping the charts for City’s defence, while only Joao Cancelo (163) won more duels than Dias (111), who also made the most headed clearances (49) and clearances overall (90).

As for Foden, the 21-year-old contributed nine goals in 28 league appearances – 17 of which were starts – as his involvement in the first team increased following the departure of club legend David Silva.

Guardiola meanwhile has been named the top manager by the Premier League for a third time, having previously received the honour in City’s title-winning years of 2018 and 2019.

Only United’s legendary manager, Alex Ferguson has won the award on more occasions than Guardiola, though he will have some way to go to match Scot’s haul of 11.