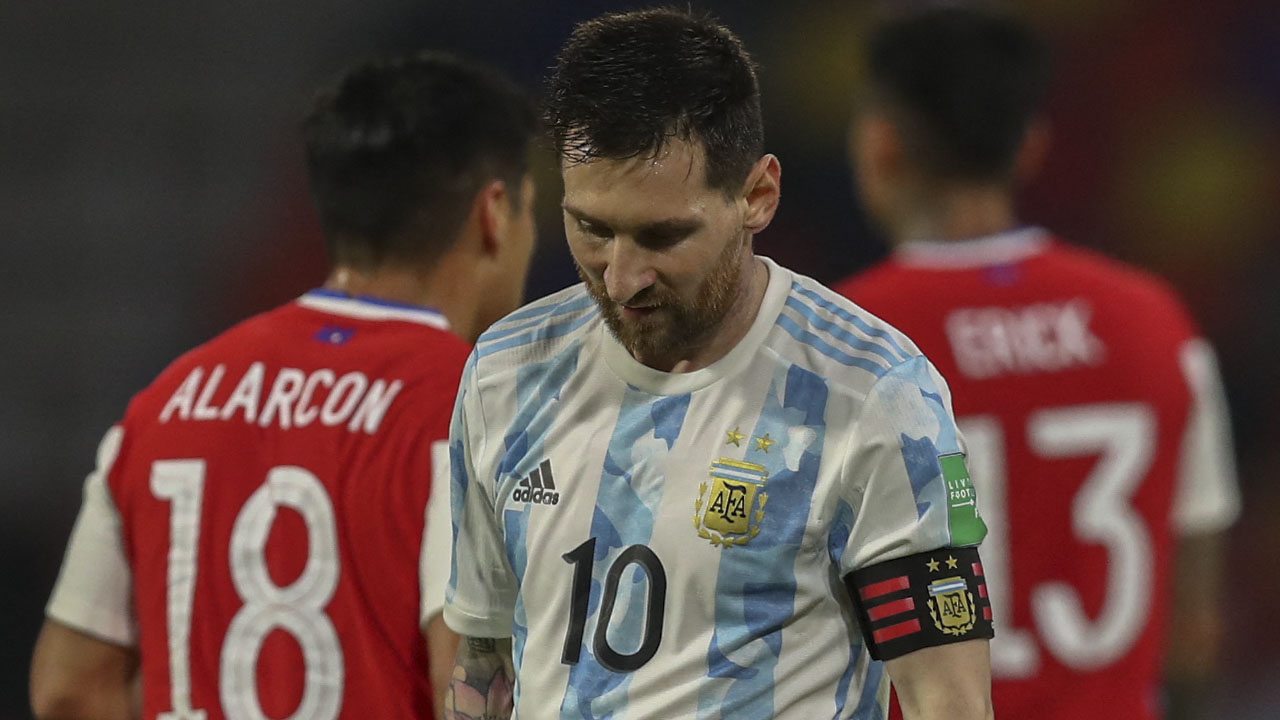 Lionel Messi scored a penalty but Argentina missed out on the chance to take over top spot of South American World Cup qualifying from rivals Brazil after a 1-1 draw with Chile on Thursday.

The draw leaves Argentina a point behind Brazil, the only remaining side with a perfect qualifying record, who host Ecuador on Friday.

Chile are down in sixth, still two points off the qualification places having won only one of their five matches so far.

Argentina captain Messi said he was happy with the result, despite failing to win.

“The team had a good dynamic, it wasn’t easy playing again after so much time,” he said. It was more than six months since the last round of qualifiers after two matchdays were postponed in March due to the coronavirus pandemic.

“It was a special match given it was the first without Diego” Maradona, the legendary 1986 World Cup winning captain who died in November.

The visitors, who were missing veteran midfielder Arturo Vidal — hospitalized with Covid-19 — had the first clear sight of goal on 15 minutes but Eduardo Vargas fizzed a low effort narrowly wide from 20 yards.

Argentina were on top, though, and the hosts were awarded a penalty following a VAR check when Guillermo Maripan recklessly brought down Lautaro Martinez in the box.

Messi casually rolled the ball low to the left of former Barcelona and Manchester City keeper Bravo, who dived the wrong way on 24 minutes.

The lead lasted only 12 minutes before Inter Milan forward Sanchez tapped home into an empty net from four yards out after a stretching Gary Medel turned Charles Aranguiz’s freekick back across goal.

“I was missing a goal against Argentina, I’d never scored one before so I’m very happy,” Sanchez said after the game.

In first half injury time Messi came close to restoring Argentina’s advantage with a freekick from 20 yards that was heading for the top scorner until Bravo leaped to tip the ball away one handed.

The hosts continued to carve out the better opportunities in the second period but Bravo saved comfortably from Angel Di Maria and Martinez.

At the other end, Sanchez fired over the bar with a long-range free-kick.

His Inter teammate Martinez was a livewire in the box and lashed a shot wide before coming inches from turning in a devilish cross into the danger zone.

Ten minutes from time, from an identical position to his first half free-kick, Messi went even closer to scoring but rattled the corner of bar and post with Bravo beaten.

The Barcelona magician came to life in the closing stages and forced Bravo into a sprawling save down to his left and then a minute later a leaping block high to his right.

On Tuesday Argentina travel to Colombia while Chile host Bolivia.

Without the suspended Edinson Cavani, whose partner gave birth to his fourth child earlier in the day, Uruguay laboured to a 0-0 draw with Paraguay that kept the two sides locked on seven points and battling for the final automatic qualification spot.

In a game of few clear chances, Uruguay actually had the ball in the net through Jonathan Rodriguez in the first half in Montevideo but it was controversially ruled out for an offside against Matias Vina.

Marcelo Moreno scored a brace as Bolivia climbed off the bottom of the table with a 3-1 win over Venezuela in La Paz.

Jhon Chancellor had equalized for Venezuela in the first half after Moreno’s early opener but Diego Bejarano put Bolivia back in front on the hour mark before the hosts’ hero sealed the victory late on.

Having lost their previous two games by an aggregate score of 9-1, Colombia reignited their push for Qatar 2022 with a 3-0 victory over Peru, who had Miguel Trauco sent off, in Lima.