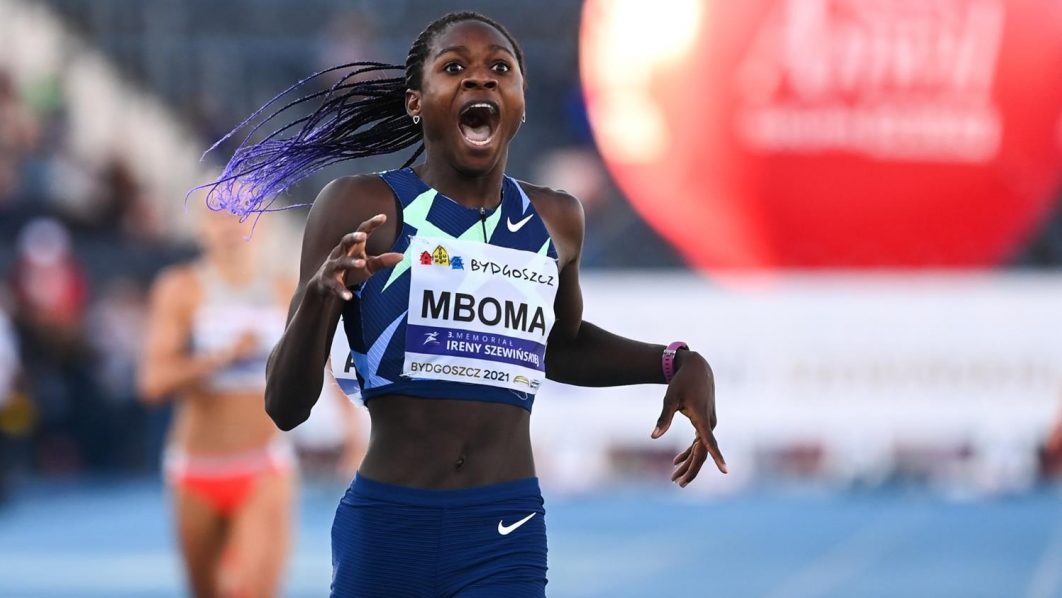 Christine Mboma looks on in disbelief after shattering the African and World Junior 400m records at a meet in Poland.

Nigerian track and field legend Falilat Ogunkoya is no longer the owner of the African 400m women’s record after 18-year-old Namibian, Christene Mboma, shattered the Nigerian’s 25-year-old mark with a blistering 48.54 seconds run at an athletics meeting at the Zdzislaw Krzyszkowiak Stadium in Bydgoszcz, Poland on Wednesday.

Mboma’s time is the first sub-49 seconds returned by an African woman donning the colours of an African nation, and the seventh fastest of all time.

Her time seems to have been confirmed by World Athletics after it was listed as the fastest time in the world so far this year and makes the Namibian the huge favourite for the 400m gold at the delayed Tokyo 2020 Olympics later this month.

The teenager’s feat shouldn’t, however, come as a surprise to athletics followers after she served notice of her capabilities last April at a meeting in Zambia and a local championship in Namibia where she ran inside 49.30s twice (49.24s and 49.22s, respectively).

Her incredible performance in Poland is reminiscent of what former Nigeria junior international, Ebelechukwu Agbapuonwu, did in the colours of her adopted country, Bahrain, two years ago in Doha, Qatar at the World Athletics Championship.

Running under her equally adopted name, Salwa Eid Naser, the 23-year-old Agbapuonwu scorched to an incredible 48.14s, the third-fastest time of all time to win the gold.

Ogunkoya has now become the second Nigerian in recent months to lose an African record set at the Atlanta Olympics in 1996.

Chioma Ajunwa’s 7.12m African long jump record, which fetched the Nigerian a historic Olympic gold, was broken by her compatriot Ese Brume (7.17m) at the end of May in California, USA.