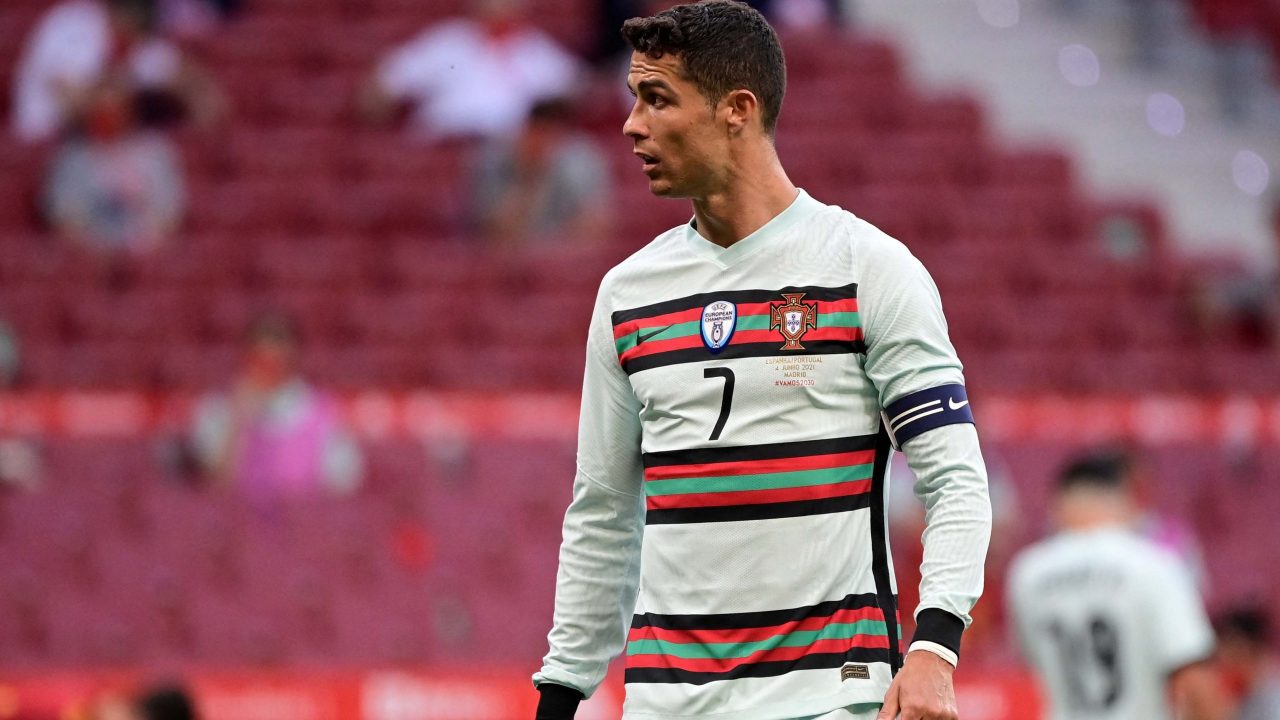 Portugal’s forward Cristiano Ronaldo looks on during the international friendly football match between Spain and Portugal at the Wanda Metropolitano stadium in Madrid in preperation for the UEFA European Championships, on June 4, 2021. (Photo by JAVIER SORIANO / AFP)

Portugal begin the defence of their European title at Euro 2020 this month boasting a wealth of young attacking talent lining up behind veteran superstar Cristiano Ronaldo.

Bernardo Silva, Diogo Jota, Joao Felix and Andre Silva are part of a new wave of attack-minded players who will be pushing for the Portuguese to become the second nation to retain the European Championship after neighbours Spain.

After missing Euro 2016 through injury, 26-year-old Bernardo Silva has become a fixture in Portugal’s starting XI, scoring seven goals in 54 appearances and providing the same dynamic, forward-thinking presence as for his club Manchester City.

Another of Portugal’s Premier League stars Diogo Jota has recovered from injury just in time to take part in the Euro and played in Friday’s goalless draw with Spain.

With six goals in 12 international appearances, the 24-year-old Liverpool forward has shown that he could replace Ronaldo up front just as easily as he can develop alongside the five-time Ballon d’Or winner.

Despite his average height (5ft 10in or 1.78m), he also managed to score three headed goals in 2022 World Cup qualifying matches against Serbia and Luxembourg in March.

Touted as the successor to Ronaldo, Joao Felix has so far failed to fulfil his obvious potential, ending this season out of the Atletico Madrid starting line-up and at just 21 with the air of a player lost.

Breaks away from the Spanish capital with the national team have changed little, with Felix starting on the bench against Azerbaijan and Serbia in World Cup qualifying before being substituted before half-time by coach Fernando Santos against Luxembourg following a distracted performance.

He also made little impact in the 0-0 draw with Spain, which was played at Atletico’s Wanda Metropolitano stadium.

“I don’t think I’ve lost my talent. Talent tends to evolve and as a team player I believe I’m continuing to evolve,” Felix said during preparation for the Euro.

‘Best period of my career’

Andre Silva meanwhile comes into the tournament off the back of his best ever season that put him in some exalted company in the goalscoring charts.

The 25-year-old scored 28 Bundesliga goals this term as Eintracht Frankfurt missed out on Champions League football by just a point, and he was fourth in the chase for the European Golden Shoe behind Ronaldo, Lionel Messi and Robert Lewandowski.

“I believe that I’m having the best period of my career both mentally and physically. I come here motivated and confident following the season I’ve just had,” Andre Silva said after joining up with his national team.

However despite his record of 16 goals in 38 Portugal matches, he seems to be incompatible with Ronaldo, the pair proving ineffective against the modest resistance of Azerbaijan during a 1-0 World Cup qualifying win.

Portugal are not lacking in talent but it remains to be seen if a highly talented supporting cast can link up with its leading light Ronaldo, who is just six goals short of Iranian Ali Daei’s all-time international record of 103 goals and level with Michel Platini’s record mark of nine European Championship strikes.