Popular Lagos socialite, Mike Eze-Nwalie Nwogu aka Pretty Mike has made an unusual yet grand entrance at an event in a convoy of six baby mamas and children, all in strollers.

This is not the first time the businessman would pull such a stunt as he did same during the wedding of Nollywood actor, Williams Uchemba and Brunella Oscar.

But then, the now baby mamas were heavily pregnant.

In a recent viral video making rounds on social media, Pretty Mike and his baby mamas were seen pushing the the strollers with their babies in each of them as they march in straight line into the event with the baby mamas wearing same black matching outfits and silver fascinators. 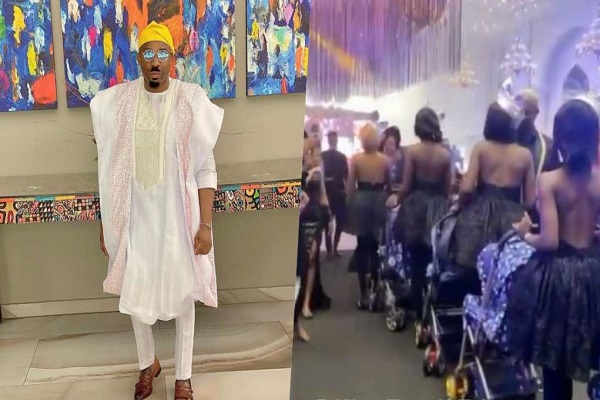 Meanwhile, it’s still unclear if Pretty Mike is the real baby daddy to these women and kids.

Nonetheless, the video has got social media buzzing on a whole new level as such has never been seen.

Social media users have expressed their thoughts on the video with most stating that the socialite sure knows how to steal a show.

Others have trolled the baby mamas and supposed fathers of the babies for giving themselves and babies up for social media ridicule.

topman_tech said: “He surely knows how to make the world talk about him always. Lol!”

larisscott_ wrote: “One thing about this guy is he’s going to steal the show any how possible.”

andeeattah stated: “In other words, his pregnant wives have all given birth. You’d think he’s done it all, then poof, he shows up with yet another wild set up.”

demmy_stoner wrote: “All for CLOUT, the GRAM and whatever you’re thinking it is. Trust me, you’re right either ways.”

officialpizolee_ stated: “Doing all he can to keep relevance.”

janenancy_i said: “He actually sits down to plan how to do these ridiculous and hilarious stunts for people’s wedding. I admire his project management skills honestly.”

drakeydavid wrote: “LMAO always stealing the show. His ways Dey ever amaze me.”

thephenomenal_girl stated: “Mike and his numerous stunts, came to steal the show in Toyin’s wedding.”

official_queendera wrote: “His styles are always unique, that’s why I like him.

blord_official said: “Hustle make another man no use your wife and pikin dey catch cruise.”

meetdejesus wrote: “Na the father’s of the kids wey he use I blame .. no wonder Buhari talk say make we behave ourselves.”

nancyolotu1 stated: “Because of money, a mother agreed to use her baby for this. Na wah o.”

beautykillsmontage said: “My problem is the ladies, I’m ashamed for them.”