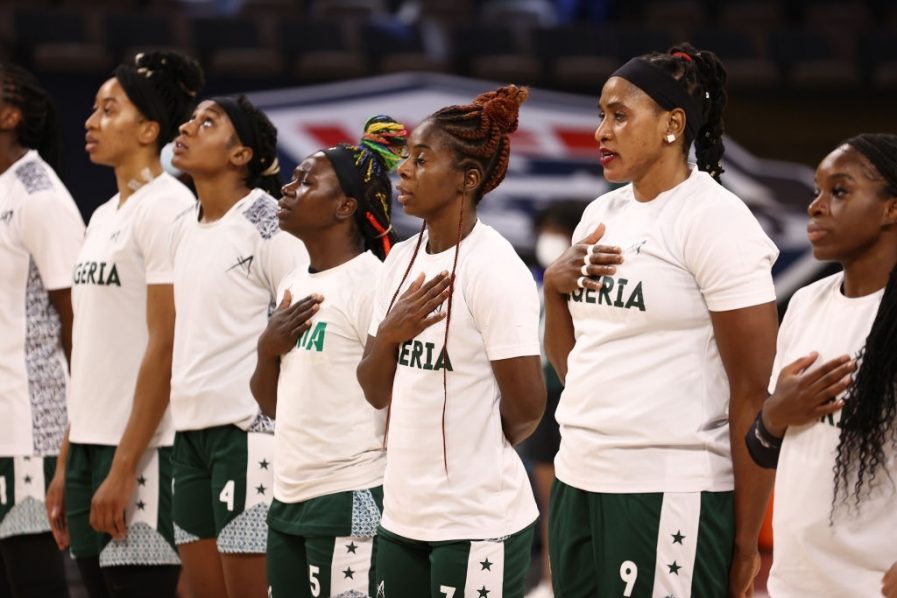 The Nigeria Women’s National Team, D’Tigress, listen to the national anthem before the game against the USA on July 18, in Las Vegas. They meet again in Tokyo,

The journey to Olympic glory officially gets underway for Nigeria’s D’Tigress at 5:40 AM on Tuesday when they take on a United States women’s basketball team out to secure its 50th consecutive victory at the Olympics.

Since losing in the quarterfinals of the 1992 Barcelona Olympics, the U.S. women have dominated the opposition. Forty-nine times, they’ve taken the court at the Olympic Games, and 49 times, they’ve left the floor as winners.

On paper, the defending Olympic champions are favoured to win. However, these Americans are beatable, having lost back-to-back matches against a group of WNBA All-Stars and the Australian national team in Las Vegas.

Those defeats came after the Americans had beaten D’Tigress 93-62nin an exhibition game in Las Vegas.

Although another win for the Americans could be on the cards on Tuesday at the Saitama Super Arena, this is a Nigerian team that has made a lot of gains over the years.

D’Tigress are unlikely to win gold in Tokyo, but they will in their characteristic nature give 101 per cent on the court as they make their first Olympic appearance since 2004 in Athens against a U.S. women’s national team that has been the gold standard in international basketball for close to two decades.

Win or lose, D’Tigress will still get to play two less daunting games against France and the host nation Japan, but their performance on Tuesday against the world’s foremost basketball nation would go a long way in determining how well they fare against the French and the Japanese – two teams the African champions are capable of getting the better off on their day.