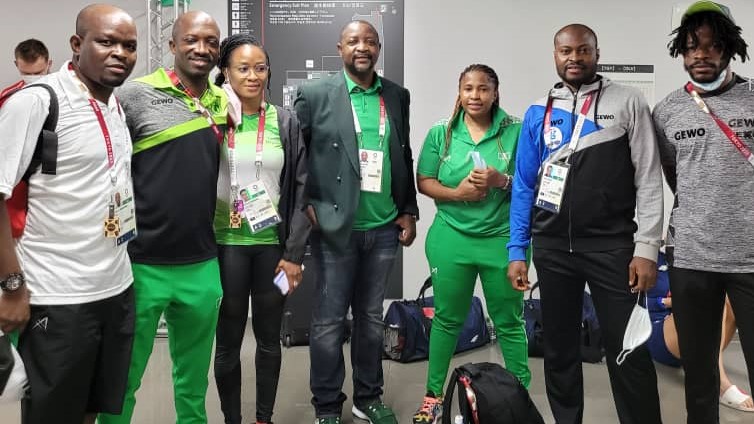 Nigeria’s Minister of Youth, Sports, and Social Development Sunday Dare has become a beacon of hope to Team Nigeria athletes at the ongoing Tokyo Olympics in Japan.

The energetic Sports Minister has shown his passion since stepping into the Land of the Rising Sun, ensuring that he watches and cheers Nigerian athletes in their events. In most cases, he’s the lone voice armed with his Green-White-Green flag, urging the athletes on.

The past 24 hours of the Olympics was not a particularly good one for Team Nigeria with her athletes losing out in their respective events, from taekwondo to table tennis, and gymnastics. The Minister has, however, remained stoically behind the athletes, bringing to fore Henry Ford’s saying that failure is simply the opportunity to begin again, this time more intelligently.

At Elizabeth Anyanacho’s fight, where she lost 12-7 to double Olympic medallist and former world champion, Nur Tartar of Turkey, the Minister hailed her courage for a debutant in the Olympics to fight with so much vim and vitality.

“You’ve done well against a world champion. Keep your focus. The world will soon rise to salute you in the near future,” he was heard telling the 22-year-old taekwondoist after her loss.

When Nigeria’s remaining competitor in the women’s table tennis single’s event Offiong Edem lost, Dare was on hand to console her saying, “you exhibited strength and talent. Nigeria thanks you for making the country proud at the Olympics.”

Amid the tumultuous Tokyo Olympics greatly affected by Covid-19, where athletes have seen their training and competition schedules affected and fans shut out from events, Sports Minister Dare has brought so much hope and confidence to Nigerian athletes.

No doubt, Team Nigeria can never forget the importance of discipline, athlete’s welfare priority brought by Dare and the importance of connecting us as a people and building a winning culture of communication, trust and teamwork.