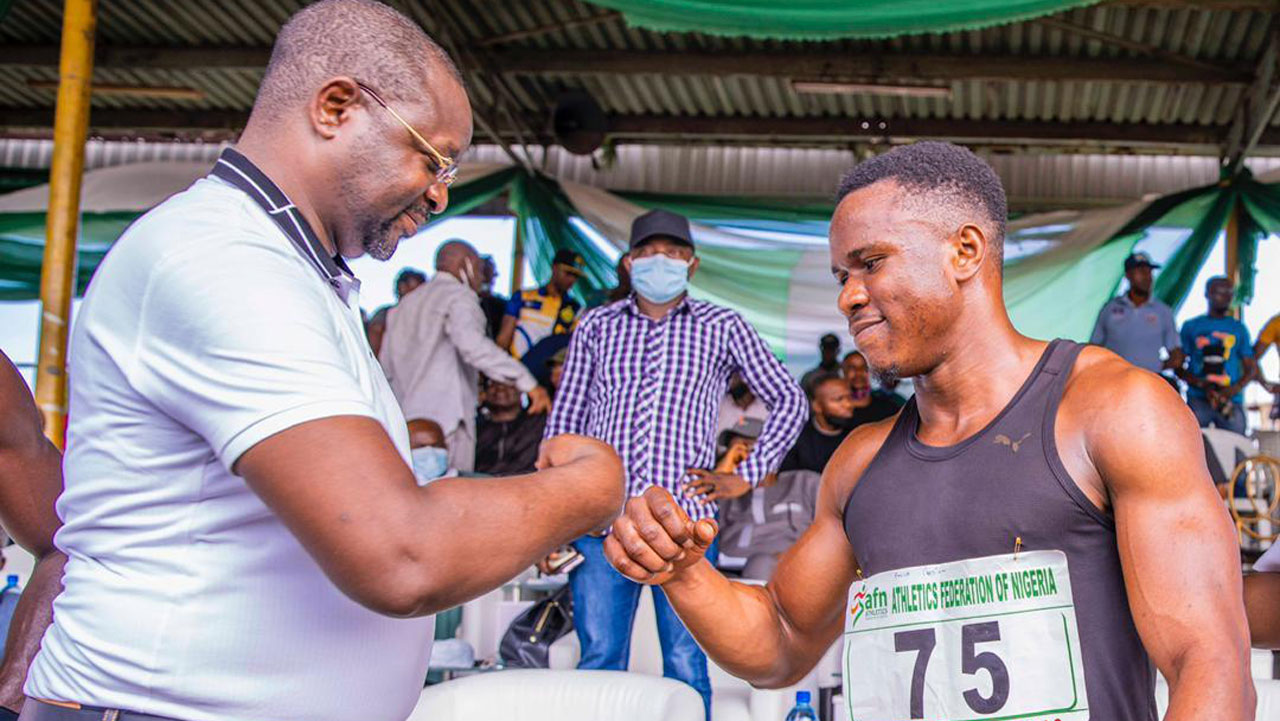 No one could have written a better script for a sports movie than what is currently going on in real-life in the Athletics Federation of Nigeria (AFN).

As you read this, kindly clear your mind of any distractions in order to be able to follow the drama through the unending twists and turns that could make a reader dizzy.

Early this week, the lingering power struggle in Nigerian sports, specifically in the AFN, took a drama-filled turn.

To add to the suspense, the following occurred shortly after the intervention of World Athletics (WA), and the Confederation of African Athletics (CAA), the international bodies to which the AFN is affiliated. These bodies approve the statutes under which association elections are held. Both bodies had visited and departed the country, leaving behind a resolution that assured all Nigerians that a level playing field for contestants seeking to be part of a new executive board of the AFN had been created.

The tenure of the last board was to end on June 14, 2021, exactly four years since the last election, and new elections were due.

WA had approved that the 2017 constitution of the AFN should be used for the new elections, setting aside the 2019 constitution that had become very problematic because of the manipulation it suffered by narrow interests within the association.

In the past one week, there has been serious ‘katakata’ in AFN. Two different elections were held with two different delegations of stakeholders in Nigeria’s Track and Field Athletics.

Two different Presidents, backed by two powerful political leaders from the same party, the APC, have emerged, each claiming legitimacy.

One election took place in far away Birnin Kebbi, far from any prying eyes. It had an electorate of 22 persons. Alhaji Ibrahim Gusau, the embattled immediate-past President, was declared the winner.

The elections were observed and endorsed by a former Minister of Sports, who had left office two years before, and had been responsible for inaugurating the put-going board four years ago. His presence at the venue of the elections plus his verbal endorsement declaring the elections as legitimate and describing a second election that took place in Abuja, as a ‘trade fair event, was a new, unknown dimension in the annals of Nigerian sports. Past Minister’s usually never had anything to do with Federation elections, except, of course, if they had become stakeholders in the federation since leaving office, which is not the case here.

The second election took place in Abuja, in the head office of the AFN, inside the MKO Abiola stadium complex. The elections were monitored and supervised by the Ministry of Youth and Sports. A delegation of 46 stakeholders elected a new President (unopposed) for the association, Chief Tonobok Okowa, whose only credential in Athletics is a political appointment as Chairman of the Delta State Sports Commission, made possible because he is the younger brother to the governor of Delta State.

24 hours after the Abuja election, the current Minister of Sports, Chief Sunday Dare, inaugurated the board in accordance to a tradition that had been established in the country for decades.

Two boards of the AFN now exist each claiming legitimacy of their elections.

Alhaji Gusau dangles two court orders from the Federal High Court and the Federal Appeals court, both empowering him to call an Elective Congress of the AFN, and prevent the Ministry of Sports from interfering in matters of the ‘Independent’ federation, including in electoral matters.

The Sports Ministry dangles the 2017 Constitution of the same AFN, approved to be used by WA and CAA, to justify the election held in Abuja.

To add some spice to the drama, the acting President of the Ministry-backed Abuja elections, Mr. George Olamide, who assumed leadership of the AFN after Ibrahim Gusau was impeached by majority of his board, summoned the elective Congress of the Federation. On the day of the election he was nowhere around the Congress venue that he convened. Instead, it was reported that he had privately congratulated Ibrahim Gusau for emerging President of the other faction.

Investigations have since revealed that he wanted to be a contestant in the Abuja elections, but needed to emerge from the South-West zonal election to determine the delegates from that part of the country. He lost the zonal elections, blamed the Sports Ministry for not backing him, turned his back against them in anger, and did not show up for the Congress he called. To further muddy the waters and spite the ministry, he congratulated the ‘winner’ of the second election whom he been part of ousting from office.

As the various national teams prepare to attend the Olympic Games next month in Tokyo, Japan, the biggest drama is still expected to play out.

At the Olympic Games national federations take a relative back seat with the Nigeria Olympic Committee (NOC), being responsible for registering the teams and taking them to the Games.

The Sports Ministry officially leads the delegation and funds the participation.

That means that the two bodies occupy the front seats. The President of the NOC, Engineer Habu Gumel, a body that could become the ‘Joker in the pack’ in this unfolding drama, was sitting next at the Sports Minister when the Okowa-led board was being inaugurated in Abuja. His presence was a clear endorsement of that faction and marks the temporary but very significant end of the road for Alhaji Ibrahim Gusau.

At the Olympics, national federations take a back seat. They do not play any official role beyond helping their country to prepare and select the best athletes.

It is clear that Ibrahim Gusau and his new board would not get free tickets to attend the games. To counter that, he claims to have just taken delivery of the official kits for the athletics team from PUMA, part of the sponsorship deal which his board had negotiated with the International sports manufacturers.

There are stories that this ‘move’ is a mere ruse, a ploy to twist the arm of government with the threat of grave consequences for breaching sections of the agreement in the contract if the team does not wear the kits. His claim is easily dismissed. There are subsisting grave allegations, under investigation by the anti fraud agency, the EFCC, that he may have soiled his hands in the contract with PUMA. The Sports Ministry has decided to distance itself from the PUMA kits ‘wahala’.

Under the present conditions, Nigerian athletes cannot be obligated to wear the kits at the Olympics.

Not attending the Olympics would inflict a grave psychological and physical blow to Ibrahim Gusau’s faction of the AFN. Attending would empower the Okowa-led new board backed by the Ministry. The board will seize the opportunity of attending the Olympics to cement their hold on the federation and establish a closer relationship with the International Olympic Committee and World Athletics, the highest organs of Track and Field athletics in the world. By the time the teams return from Japan it would have become very clear that the only place for any further fight by Gusau would be in the civil courts where he had being for over two years battling to survive.

Even the elements have decided to take sides in this matter. A few days ago, the Olympic trials for Athletics began on the tartan tracks of the Yaba College of Technology sports grounds, organised by the Ministry of Sports. The members of the Okowa-led board were on ground at the event to perform their first official assignment. Blessing Okagbare, Nigeria’s golden girl of athletics, ran the fastest 100 metres race in the world this year. Her time of 10:63 secs, if and when ratified, will become the second fastest time in history. The record and wind speed are awaiting ratification by WA.

As Nigerian athletes prepare to go to the Olympics, it is becoming clearer that in developing countries, particularly in Africa, the independence of national sports federations is predicated on their ability to fund all their activities. ‘He who pays the piper dictates the tunes’.

As governments fund most international events involving the national teams, it is preposterous to suggest that they should not have a hand in how their funds are spent, even as the constitution of Nigeria, for example, gives the Ministry a superintending role over all sports, which includes the national federations.

That is the reality Alhaji Gusau and other stakeholders aspiring to lead sports would have to contend with in the weeks, months and probably years to come, because for all long as government funds most of the international competitions involving the national teams, and provides the sports secretariats, the federations cannot escape some level of intervention and even interference in their affairs.

Moreover, most of the national sports federations do not have domesticated constitutions approved by their international federations. In the absence of these, their operations and affairs are run by a secretariat that is established and funded by the Sports Ministry.

It is apparent that Ibrahim Gusau is fighting a futile battle against government. He will learn soon enough that from the recorded history of Nigerian sports, no one has ever fought government and won.

In this unfortunate saga, it is the Nigerian athletes that will suffer the consequences of another long season of confusion and crisis in the affairs of their federation, if Gusau chooses to continue to pursue the struggle.

Two big questions now arise from the debris of the present infighting:

Who blinks first and surrenders for the good of the athletes and the game?

Will this brouhaha not affect Nigeria’s performance in Track and Field in Japan?

The Olympics, in five weeks time, will reveal the answer to the first question.

The answer to the second question is that even with the crisis that engulfed some national federations these past few years (in football, basketball and athletics, mainly) the athletes have continued to do well in their circuits.

Nigerian athletes are used to the shenanigans in sports administration and never let those distract them. They continue to hold the flame of potential champions as they struggle with modest help from their perpetually beleaguered sports administrators.

This is surely not the best way to get the best from athletes. Things could be a lit better and more rewarding with the proper harnessing of the abundant natural talents available in the country. The country must get its sports administration mechanism and architecture right. It can start by giving those with the experience, knowledge and the qualifications the opportunity to preside at different levels over sports, and by removing all the obstacles in the way that ensure that only those with money to burn and access to political godfathers lead sports administration in Nigeria.

Between the two ‘fighting’ Presidents of the AFN, neither is grounded nor comes from the background of athletics.

This fracas, once again, affirms the need for a sports revolution in Nigeria.

Deserving and qualified retired athletes have to start to be supported to head Nigerian sports, for a change.

In the next one week, the Nigerian Olympians Association, will be congregating in Abuja to mark the possibility of a new movement. These are an assembly of some of the best athletes to have represented the country at an Olympic Games between 1952 and the present time.

One of the most challenging tasks for the group would be how to convert their rhetorics into action; how to take this revolution mantra from ‘idea’ to ‘reality’, and start to chart a new course for themselves in sports in the country.