We will produce more MMA champions for Nigeria, says Usman 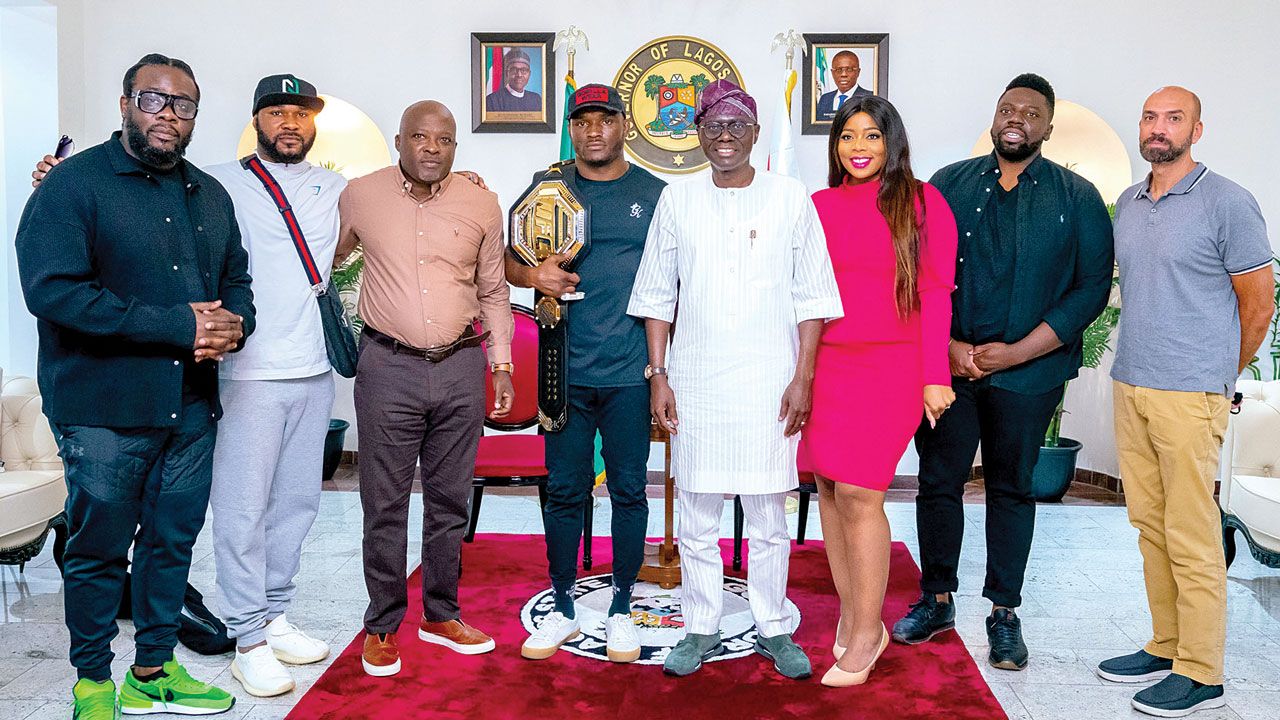 Kamara Usman is arguably one of the best-known faces in kickboxing. The UFC welterweight champion has won everything there is to get in his class and in some quarters, he is seen as the best pound for pound fighter in Mixed Martial Arts (MMA).

However, with all the fame and fortune his talent has fetched him, Usman has been restless and battling to return to his roots, first, to share his experience with ‘my people’ and then find a way of getting more Nigerian youngsters employed in the lucrative world of kickboxing.

Nicknamed ‘The Nigerian Nightmare’ by admirers, friends and foes, Usman has set out on the mission to give back to Nigerians for their support and prayers over the years. He arrived Nigeria at the weekend and has been meeting with stakeholders to find a way of actualising his dream of building a sustainable sports culture in the country.

The Auchi, Edo State-born star, was in Lagos, yesterday, as part of his working tour of the country and one of the messages he preached at the Wheatbaker Hotel, Ikoyi, is the need to empower Nigerian youths by providing a conducive environment for them to hone their skills.

Usman disclosed that his camp has started discussing with relevant agencies on the best way to actualise his dream of building future champions from Nigeria, adding, “When we first came in, we had to see the powers that be, the decision makers.

“We have gone there, dialogued with them and reached an agreement. We have created that starting point, now it is up to my team to put the plan in place and show them what we want to do and eventually start the dream.”

Drawing on his experience in the United States, Usman said he had opportunity to choose wrestling over other sports because he had several choices.

“When we got to America, my elder brother, Dr. Usman Kash, chose football… he also played and did athletics very well. I tried, but I couldn’t make it. So, I decided to choose something else. And America has different sports opportunities for youths to practice and excel. I fell into wrestling, which eventually took me to MMA. That is why we want to give Nigerian youths different opportunities to choose the sport they want.”

Apart from helping to discover fresh talents in Nigeria, Usman is also involved in the careers of other Africans in the MMA, saying that the dream is to see the fighters from the continent dominating the sport.

“We have many Africans in UFC and three of the champions are from West Africa. We exchange ideas when any one of us has a fight.

“Razaq, the Ghanaian star, is my brother and he comes to my camp to train. He is with me because we live in the same Texas. I also talk with Sadiq often but he lives a little farther… we have means of communicating to share ideas,” he said.

Explaining his decision to quit wrestling for MMA, Usman said although his parents and associates questioned his choice because of the brutality in the sport, he chose MMA out of love for the game.

“It was something I chose to do by myself. I saw an opportunity and I thought this is something I want to do. So, I went to acquire the knowledge and worked as hard as possible to put myself in the best position to get to the top.”

After dominating the welterweight class for several years, Usman is not disposed to moving up to the middleweight category. His decision is hinged on the need to preserve Nigeria’s stake in the sport.

He said, “The next weight class is middleweight and Israel Adesanya holds that belt. As I have said before, two Nigerians with two different belts are better than one Nigerian with two belts.”

Pound for pound, many followers of the sport believe Usman is the number one fighter, but the records don’t show that. They say John Jones is the number one, a claim that does not bother the Nigerian fighter.

He said, “That is only UFC’s rating. They have their own set of ranking, but we have ESPN, which is bigger and has its own raking system and I am number there. Everywhere I go, I am celebrated, as number one in the world. So, I will continue doing my thing, continue to excel until I give UFC no other option than to recognise that I am number one.”